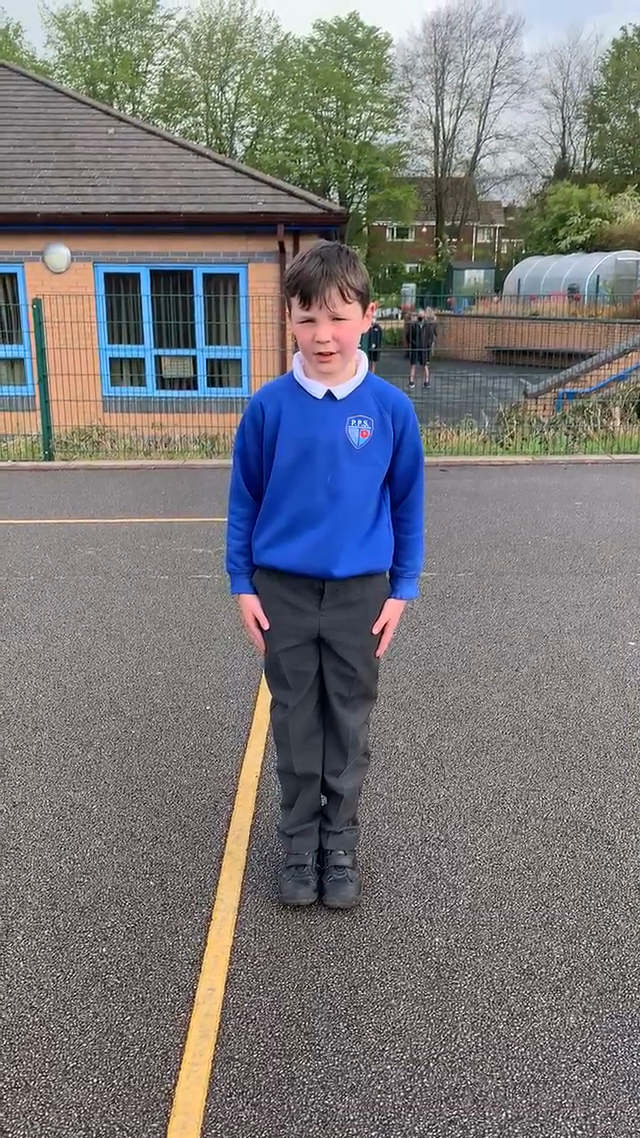 Starting Monday 24th May, children in KS2 will be starting the new PPS Champions League. In teams of five from their class, they will compete in different activities each week to get the best time or score. Wherever they place each week will determine how many points they get in the league table. After six activities, one team will be crowned champions of the very first PPS Champions League. 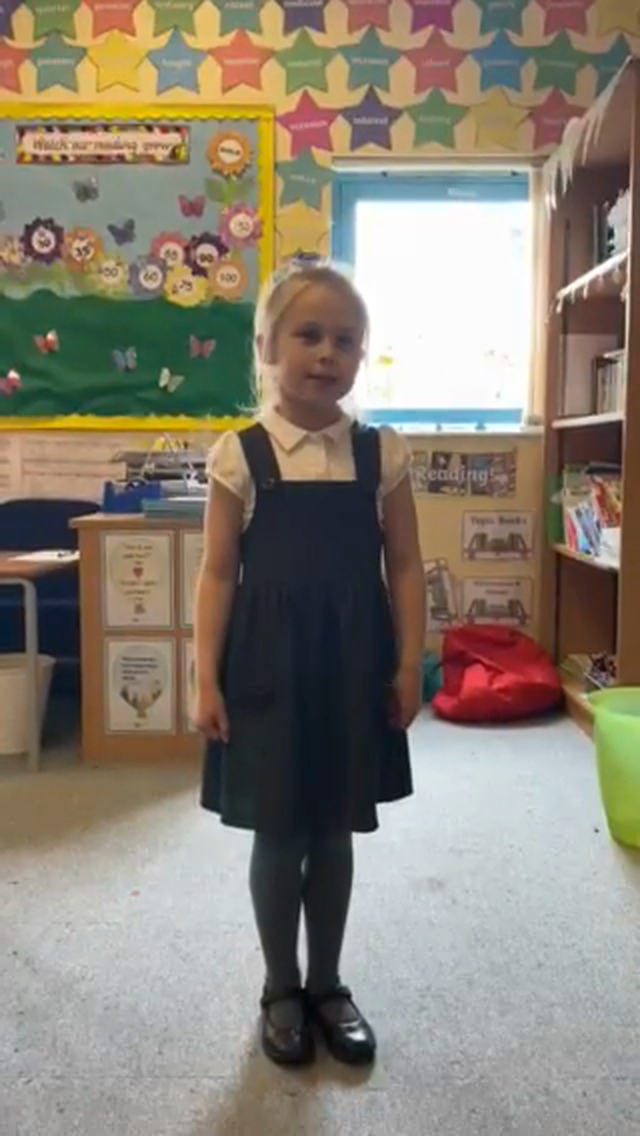 This week's challenge is the box press up! Don't forget to tell your teachers your results :-) 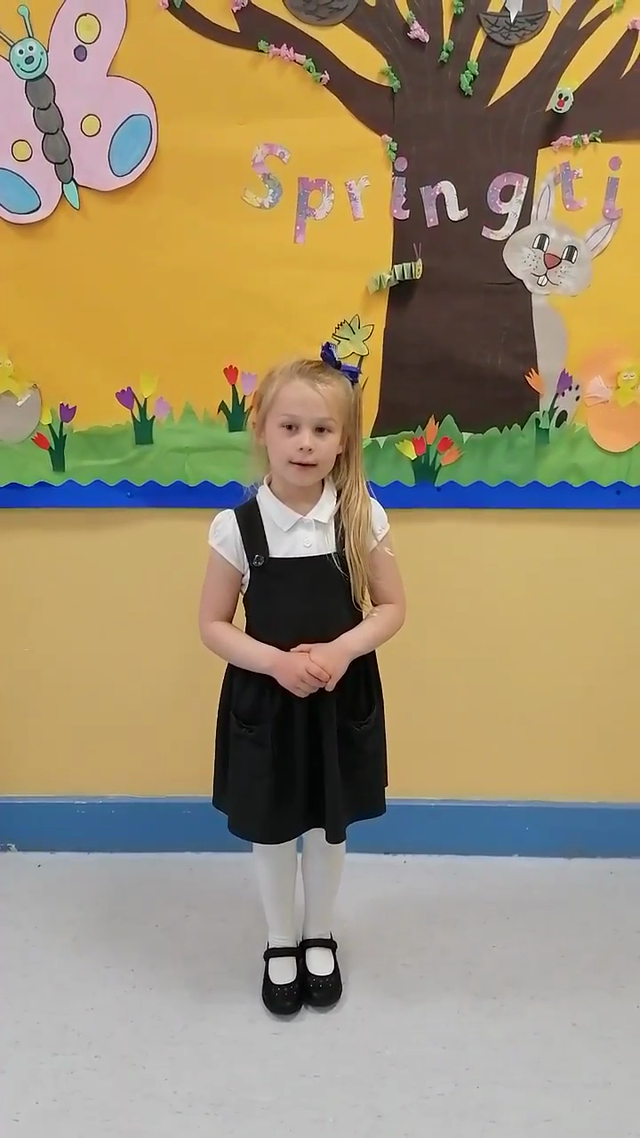 This week's challenge is power jumps. Submit your results to teachers! Good luck! 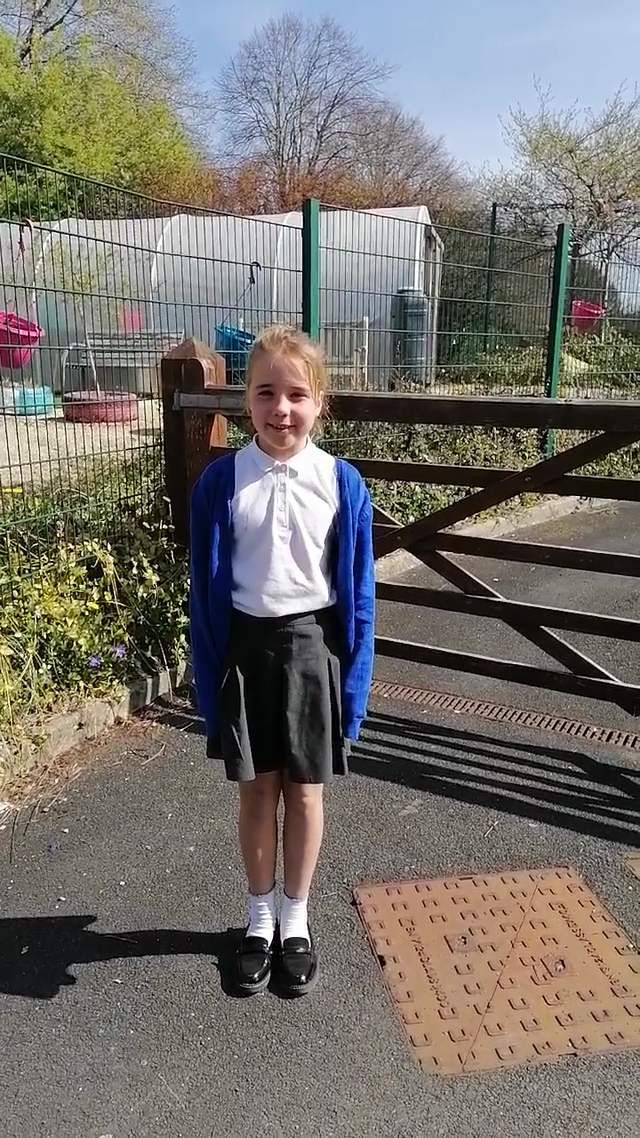 This week's challenge is jumping lunges! Submit your results by Friday. 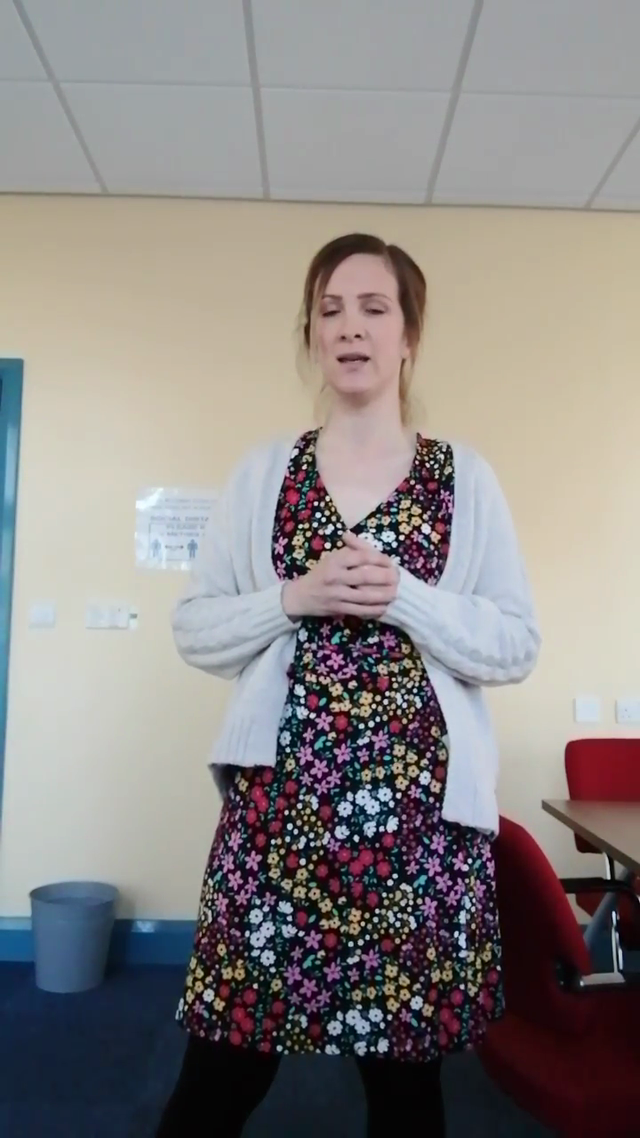 This week's PB Challenge is 'air punches'. Send your results to us by Friday! Good Luck! 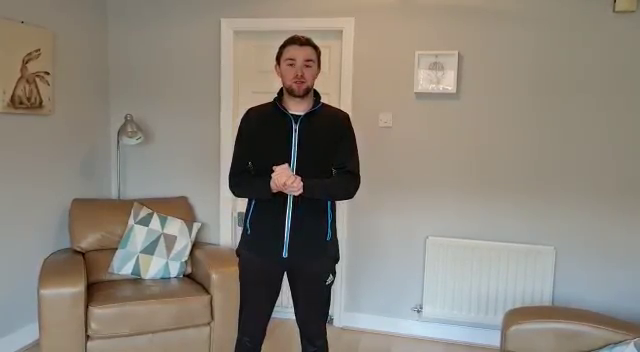 Week commencing - 12th April 2021
This week's personal best challenge is 'scissor kicks'. Infants you have 30 seconds and juniors you have 60 seconds. Good luck!

On Tuesday 2nd March our B - Team football team were invited to take part in a competition hosted by Burnley Schools Sports Partnership at Shuttleworth College. Four other schools within the area were invited meaning we would play four games overall against Whittlefield, St. Leonards, Ightenhill and Lowerhouse. Our first game against Whittlefield started off the competition superbly, a 1-0 win against a strong side gave us confidence going into the upcoming games. A defeat to St. Leonards in our next game came as a surprise having dominated most of the game up until the last kick of the match. We came back fighting in our third came against Ightenhill having hit the crossbar, the post and being denied by their goalkeeper countless times resulted in a 0-0 draw. After a rest and a drink we were ready to give it our all in our last game against Lowerhouse, arguably the strongest team we would be playing against. A superb piece of football finished off with a goal to match it by Cody put us 1-0 up within the first few minutes of the game. However, Lowerhouse counter attacked straight away to level the game. Our boys kept battling till the last kick of  the game but it was not enough, we had to settle with a draw. Well done to all of the boys who took part, you all played superbly and played the games with a good spirit.

On Wednesday 22nd January Aaliyah, Leo, Corey and Mia all took part in an Inclusion event at Sir John Thursby hosted by Burnley Schools Sports Partnership. Taking part in different catching, throwing and batting activates which all led up to a game of rounders. Well done to all the children who attended - you represented the school fantastically. A special mention to Aaliyah who was our schools Sporting Star of the tournament. 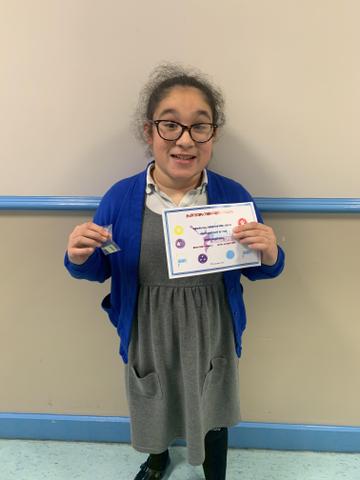 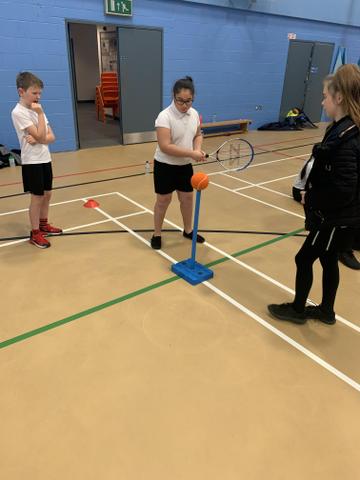 Our girls football team (from across year 3-6) put on a remarkable performance on Thursday. They fought hard to win 2-0 in the first round of the newly established Girls Hartley Cup. The squad will now progress on to the next stage where they will face another team from across Padiham or Burnley. Outstanding efforts from you all. Our school is very proud.

Up and Active Sessions

Class 3/4R are currently receiving six weeks of Up and Active sessions. This is contributing towards the awareness of the health and physical activity and the benefits leading a healthy active lifestyle can bring. Here you can see some of our children working together to work out which foods belong in which food group.

On Friday 1st November four of our pupils were chosen to take part in an angling session at Cornfield Farm Fishery. Angling gives children the opportunity to learn new skills and knowledge, enjoy the outdoors and enjoy the many health benefits that the sport of angling brings. The coaches from the Angling Trust taught us how to catch the fish safely and release them back into the lake. After we got past the fear of hooking the maggots onto the fishing rods and holding the fish we had a competition to see how many fish we could catch. Well done to all the children who took part. 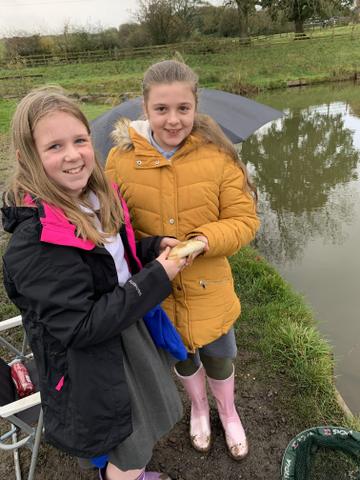 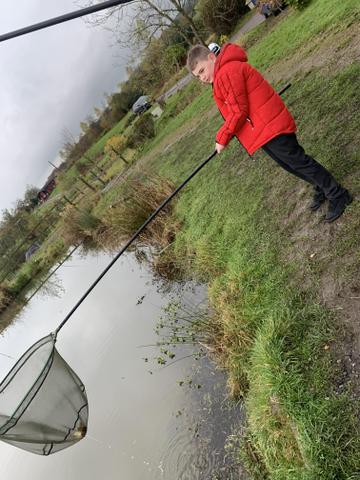 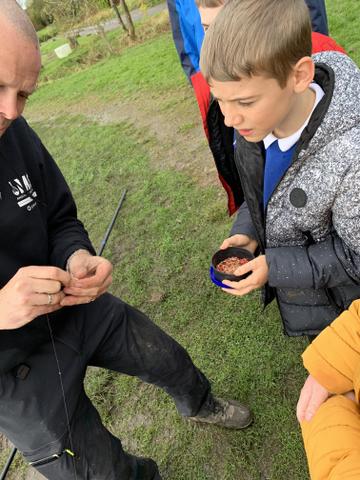 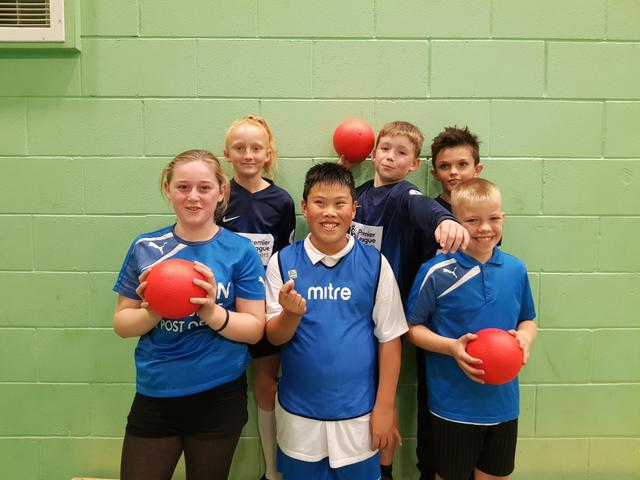 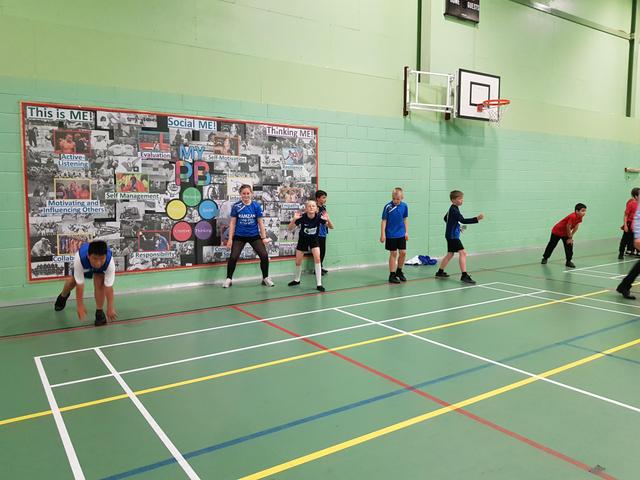 On Tuesday 1st October, 6 children took part in a dodgeball event at Shuttleworth College. They competed against other local schools. The team were excellent in their all-round game and managed to win all but one of the games they played. Padiham's strongest point was their catching, which meant that players were able to be brought back into the game soon after being knocked out. This meant Padiham almost always had a full team on the court. The team played very well and worked hard together to find their success. Well done. 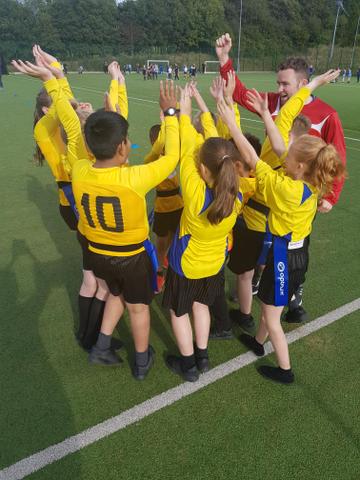 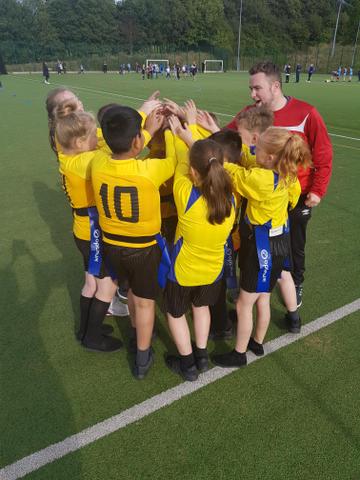 On Tuesday 17th September, ten children travelled to Shuttleworth College to represent PPS in a Tag Rubgy event. The team played extremely well throughout the event and were very proficient in taking tags. The team also scored some outstanding tries that included some excellent passes and individual runs to the try line. The children represented the school to the highest standard. Well done!

Four of our year 2 children had an excellent time during their fun run at Towneley Park last week. They all represented our school perfectly. Congratulations on a terrific job!

We are delighted to announce that we, Padiham Primary School, have achieved the School Games GOLD Mark Award for the 2018/19 academic year. The School Games Mark is a Government led award scheme launched in 2012, facilitated by the Youth Sport Trust to reward schools for their commitment to the development of competition across their school and into the community, and we are delighted to have been recognised for our success.

We are extremely proud of our pupils for their dedication to all aspects of school sport, including those young volunteers, leaders and officials who made our competitions possible. As part of our application, we were asked to fulfil criteria in the areas of participation, competition, workforce and clubs, and we are pleased that the hard work of everyone at our school has been rewarded this year.

This year we have teamed up with Burnley Schools Sports Partnership to try something new. Our year sixes were invited to Cornfield Farm Fishery to learn some new skills and knowledge about fishing. During our time at Cornfield Farm we learnt how to correctly catch and release a fish and identify which fish we caught. Despite the weather, we all had a fantastic time and would definitely go again. Well done to Liam, Owen, Teigan and Lewis for representing our school superbly! 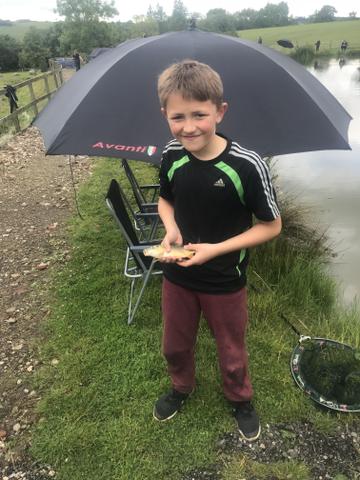 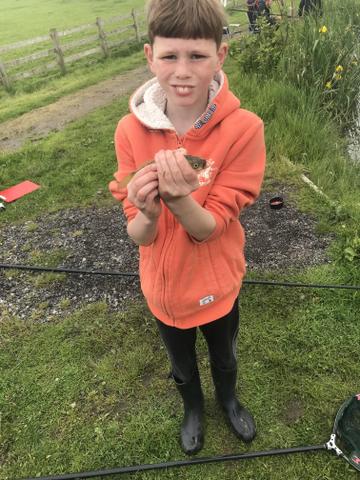 On Tuesday 21st May, our year 5/6 netball squad went to Thomas Whitham Sixth Form to compete in this year's High Five Netball Qualifier. We had three games and the children showed great strength, determination and resilience throughout. Our umpire in training Sara, officiated two games and even got a special mention during the group gathering at the end of the tournament. Well done to you all!

On Tuesday 5th February, 8 pupils from year 1 and 2 took part in an athletics competition at Shuttleworth College. Taking part in a variety of field and track events, the children were put to the test against other local schools. The children worked extremely hard and were an excellent team. At the end of the event, Padiham Primary were announced as the 3rd placed school. The children represented the school to the highest standard. Well done.

On Tuesday 15th January, 4 children from year 3 and 4 represented the school in a basketball event at Shuttleworth College. The team were competing against other local schools. They played extremely well and managed to win their first 3 games. The final 2 games ended in defeat but the team represented the school to the highest standard. Well done.

On the 4th December 2018 Talia, Oska and Noor- Ul-Ain took part in a gymnastics competition at the BEST Centre in Burnley. These children were chosen for their outstanding performances in our gymnastic after school club. The children had to perform a floor routine and a vault routine in front of other schools. The children were a little nervous but remembered their routine and represented the school to the highest standard.

On Tuesday 13th November, 12 children from years 5 and 6 took part in this years Sports-hall Athletics event. Padiham girls came third in the first heat of the relay race and came back fighting in the second round to secure second position. The boys did exceptionally well on the field with high scores in the Javelin event. The girls continued their success on to the field with remarkable scores in the speed bounce and triple jump event. The boys worked tirelessly on the track, but were unable to secure a win due to the baton exchange. The children all did an amazing job! Well done to you all!

Padiham were drawn against Worsthorne in the first round of the Hartley Cup. A much changed side from last year saw some debuts in the match. Injuries also opened the door for others to represent the school. A nervy start saw PPS concede 3 goals in the opening 5 minutes. However, Padiham defended resiliently and had chances of their own before the break. We went in at 0-3 at half time. The second half saw Padiham score 2 goals themselves but conceding another 5 after committing more players forward. A hard-working performance by the team was not reflected in the final score of 2-8. Well done to the team. Good luck to Worsthorne in the next round.

On Tuesday 30th October, Padiham Primary were invited to take part in a football event. The girls team played really well. After a 3-0 loss in the opening game, the girls weren't going to let that happen again. Resilient defending in the following match meant they shut out the opposition after facing an onslaught of attacks. That finished 0-0. The third match saw PPS grab their first goal and keep another clean sheet. A 1-0 victory for the girls. The final two games finished 0-0. A good record for the first girls football event of this school year. Well done to the team!

On Tuesday 9th October, PPS were invited to take part in a football event against other local schools. This was an excellent chance for children to test themselves against other teams. The whole team represented the school really well and worked extremely hard in all of their matches. The team came away without a win, but can be extremely proud of the way they played. They gave their all and worked really well as a team.

On Tuesday, seven year 1 children and 2 year 6 children took part in a Balloon Tennis event at Shuttleworth College. The year 1s were taking part in the event while the 2 year 6 children were there as school leaders. They had to umpire games and help children from all schools to play the game. All 9 children represented the school to the highest standard and showed their hard work and dedication was excellent. Well done to the children who took part.

Unfortunately not the ones with chocolate chips.

Some cookies are necessary in order to make this website function correctly. These are set by default and whilst you can block or delete them by changing your browser settings, some functionality such as being able to log in to the website will not work if you do this. The necessary cookies set on this website are as follows:

Cookies that are not necessary to make the website work, but which enable additional functionality, can also be set. By default these cookies are disabled, but you can choose to enable them below: